And now for a sneak preview at the first chapter of Bloody Little Secrets! 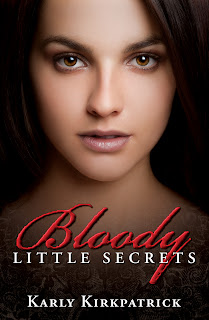 I never feared the dark, until I became part of it.

My eyes fluttered open; yet nothing seemed to change. Inky blackness swirled around me. A scream rose in my throat, but I quickly swallowed it. I pressed my eyes closed, hoping that when I opened them again, I’d be able to see something, anything.

I turned my head. My neck moved in slow motion and creaked like a rusty hinge. My hair rustled against some kind of fabric. Beneath my fingers it stretched, silky and soft. I ran my hands out to the side and above me. More fabric. Satin, I guessed. The air was thick and stuffy, making it difficult to breathe. My hands pressed harder and found resistance at every angle.

I was in a coffin.

I banged on the lid that was just a few inches above my nose and screamed for help, my muffled voice bouncing around me. It didn’t budge. I had to get out. My breathing became more ragged.

I started pounding with all my power on the lid. The wood cracked as my fist exploded through it, sending splinters and dirt onto my face. I spit out a few clumps that landed in my mouth. Nasty.
Damp air rushed in through the hole. My arm burned as I pulled it back through, ripping my skin on the jagged pieces. Blood dripped down it, pooling in the crook of my elbow. Tears trickled down my face.

With just a little moonlight coming through the hole, I saw my surroundings. White satin crowded around me. I glanced down, forced to twist my head at an uncomfortable angle, and discovered someone had dressed me in my Homecoming dress. What the hell? Somebody would have some explaining to do.

The burning in my arm had stopped. Maybe it had just gone numb. Whatever. I had to get out of here. I could get it stitched up later.

Two more loud cracks sounded as my fists burst through the lid again, clearing a much larger space. The thick wood pieces offered little resistance as I pushed them to the side. Blood oozed down my arms, both shredded from the splinters. I had enough space now to at least get my head and shoulders through. Reaching out of the coffin, I dragged myself out, sliding across the top. I slipped in the light layer of dirt on the lid.

I was thankful whoever had locked me in there hadn’t gone so far as to bury me. I mean, I remember the time my friends had locked a sleeping Pete Stevenson in Jenna Gorski’s trunk after Homecoming, but that was a joke, and someone was waiting to let him out. They’d gone too far this time.

Something stabbed me in the knee. The dusty petals of wilted roses littered the top of the coffin. I picked one up and brushed it off. It matched the pink of my dress.

I was at the bottom of a grave, about six feet down. No one had bothered to leave me a rope or anything. Fear melted into anger. My breath hung in the air in front of me, yet I couldn’t feel the chill. Time to do some climbing. The same dumbass responsible for this sick joke also had the wise idea of locking me in there in nothing more than a pair of pink high heels. I kicked them off and stood on the lid of the coffin.

The earthen walls were as smooth and hard as stone. My fingers searched the dirt for leverage. There were few options. With one swift motion, I slammed the pink spiked heel into the hard-packed earth. I dug my bare toes into the makeshift ladder. The shoes held my weight and after a minute I was able to pull myself over the edge.

I rolled onto my back and let an exasperated breath out toward the night sky. It was dark here, and the stars were bright. I sat up and my fingers explored the spattered and dirt-streaked fabric. I attempted to brush the same filth from my arms and legs with no success.

“What the heck?” I ran my fingers down my forearms. The deep wounds were gone and the dried blood made my skin feel stiff.

Whoa. This was not normal.

A handmade white wooden cross marked the head of the grave. I crawled over and ran my fingers along the handwritten black letters.

It looked like my dad’s handwriting. My senior picture was stapled at the intersection of the two pieces of wood. My long, dark hair was straight and expertly placed around my face. Head tilted, I flashed a winning smile at the camera. Straight teeth, dimple in my cheek, my skin dark and smooth. A date ran down the vertical portion of the cross.

But I didn’t look dead, or at least I didn’t think so. My skin, apart from being bloody and dirty, didn’t appear to be rotting. I sniffed my arm. It smelled earthy from my surroundings, but not dead. I felt my face, my hair. Same thing. Everything seemed one hundred percent intact.

This had to be a joke.

“Very funny. You can come out now.” I scoured the graveyard for any sight or sound that might give my friends away. This was far from funny. It was a shitty thing to do. And when I found out who did it, I was going to show them just how unfunny it was.

A branch snapped in the woods twenty feet in front of me with a loud crack. The dark trunks stood dead quiet and imposing at the edge of the graveyard. I jumped to my feet. My eyes swung across the rows of headstones before me which, despite the faint moonlight, seemed clear as day. I couldn’t see anyone, but I heard breathing.

I crept closer to the trees and shrubs that formed a wall around me and jumped from grave to grave. I hid behind the large marble headstones. A blur caught my eye as something ran through the woods in a completely I’m-not-a-prankster-but-a-rapist kind of way. I dropped down behind an ornate headstone of an angel, its white arms raised to the sky. Maybe I had the wrong idea. Why go towards a strange noise in the woods? The smart thing to do would be to run the other way.