Guest Post: The Indelible S.R. Johannes - Out There On My Own

I'd like to introduce you to a great new debut author, S.R. Johannes. Her book, UNTRACEABLE, will hit the e-shelves in a mere 12 days on November 29th so be sure to add it to your to-read list. S.R., also known as Shelli, originally had pursued traditional publishing, like many of us, and had gotten very far in the process. After hitting some bumps, she decided to pursue other options. I'm so happy she is able to share her story with my readers. While I never bag on traditional publishing, I feel that it's important to understand every side of the process, good and bad, so you know whether it's traditional or indie publishing, just what you're getting yourself into. Be sure to check out her blog, http://faeriality.blogspot.com/ and follow her blog tour. Thanks again for sharing, Shelli! 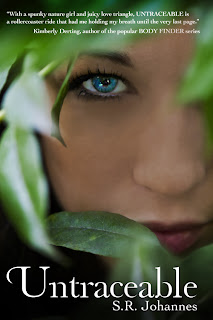 Karly asked me to talk about when I made the decision to indie pub.

I started to think back and realized…it was always in the back of my mind… somewhere.

Before I ever got an agent, I had 2 books go to acquisitions. My first was an MG fairy book. I – of course – at the time assumed it would automatically be picked up by the publisher who was considering it and my bestselling book would shove Harry Potter right off the charts. When they ended up not taking it, I was devastated. It was then that I remember talking to people about self pubbing. That was about 6 years ago, right after Eragon came out after being self published and ended up a huge hit.

I don’t know what held me back at the time – maybe fear, maybe ego.

I went on to do a Nonfiction tween book that went to Acquisitions at American Girl for their Smart Girl series. Again, when it was rejected, the thought of doing it myself crept up again. I know marketing and packaging- why not?

But something or someone always deterred me.

Then I got an agent for my 3rd book. So the thoughts were buried. I didn’t need to think that anymore because once you got a top agent at a top literary house, you would get published. Right?

My tween fiction book went to acquisitions at a few houses, made it to several editorial boards, and I completed 3 noncontractual revisions. All ended up going to the great land of nowhere.Talk about frustrating and devastating and unfair! After wallowing in my own self pity for a couple months, I picked my ego up off the floor and revised Untraceable for over 6 months. Then, my agent sent it out to a couple houses, where once again it went to an Acquisitions Board and was discussed. Only to be turned down because it was too similar to another book they just bought. Another house considering it felt a contemporary thriller with a tough girl would not sell unless it was dystopic.

My agent started talking about not sending the book out any more because she didn’t know how to fix it. But I was not going to give up on this book. I wanted it to go out on another round. Most books get 3 rounds not one small one. She disagreed. After going back and forth – we decided that we probably needed to part. I wasn’t ready to give up and she wasn’t sure how to get me to the next level.

That was the hardest decision of my career – leaving a top agent and going on my own.

After that I had several agents interested in my WIP but none of them would touch Untraceable because it “had been seen by some editors”. It wasn’t until someone said, “You are a marketer, you can do this book on your own and probably do it better than a publisher can.” Then I remembered always wondering about self or indie publishing. I know distribution, I know packaging, and I know marketing.

For a while I thought about putting the book out under an alias. But I am not one to hide from people and it would not have been smart marketing to try and start a platform over again.

So I decided to put my fears and insecurities out there on my blog for all to see and move past this weird time in my career.

I’ve gotten great support from the blogger community and have had a wonderful time doing this project. It is the best I can do right now – I'm happy with it and proud. The process has been a wonderful journey.

It has lifted a huge weight off my shoulder that after years of people rejecting me – I’m in charge of my own dreams and destiny.