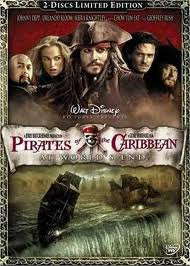 In preparation for this weekend's release of Pirates of the Caribbean: On Stranger Tides, we watched the first three movies over and my daughter, who is 4, watched them for the first time. Every time she sees ads for the new movie she gets super excited and goes chattering on about Captain Jack Sparrow. It's way cute. Except she's sort of in this super-questioning mode and anything she watches with us that isn't a cartoon (Harry Potter, Pirates, Thor, Bones, whatever) she has 800 questions. Imagine trying to explain to a 4-year-old the whole Will Tuner becoming the captain of the Flying Dutchman thing or why Calypso dissolves into a million crabs. It was rather a challenge.

I remember people saying that they didn't care for the second and third Pirates movies, but after watching them all again, I really love them! All of them, even the last one. Funny, we had bought At World's End years ago, but it was still in the plastic wrapper. Oops! We have such a huge movie collection, that happens a lot though. I think my favorite scenes in At World's End include the multiple Jack Sparrow scene when he's in Davy Jones' Locker, the Elizabeth Swann and Will Turner wedding during battle, and the heartbreaking scene where Will Turner becomes captain of the Flying Dutchman. *sigh*

An awesome special effects/cinematography moment was when Lord Cutler-Beckett was walking down the steps of the doomed Endeavour as it exploded around him. Some exquisite camera work and special effects there. It's stunning. I'm really looking forward to On Stranger Tides and hope it's as great as the others!