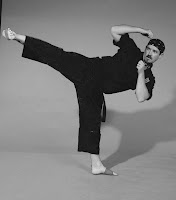 I remember it all so well. I was fresh off my second Nobel Prize for Literature, and was contemplating whether to throw away my Hugo or my Nebula award to make room for the new trinket on my "Shelf o' Awards" as I like to call it, when my agent came a-ringing. It seemed that Harry Potter-land in Florida was doing well, but not well enough. So they wanted to tear it down and build Michaelbrent-topia, and simultaneously do a movie about the whole process. Charlie Sheen wanted to play me.

The above, of course, is ridiculous. We all know Charlie Sheen is too busy going in and out of jail to want to play me.

Plus everything else I've mentioned. Picture the exact opposite. Plus picture me much shorter. Not so short. Somewhere in the middle.


Okay, seriously (ha!)...writing has basically been something that I was doomed to do. My dad was an English professor who graded my first piece of art - a Crayola story about a parrot who escapes its cage - when I was four. He went from there to editing my more "mature" work (aliens, dinosaurs, and the occasional juvenile horror story where I killed off my brother because after all he shouldn't have been using the bathroom when I needed it); and then continued teaching me through my high school and college years. Add to that the fact that my father was friends with such luminaries as Orson Scott Card (Ender's Game), Dean Koontz (The Face, The Good Husband), and Frank Darabont (The Mist), and I was doomed. No matter what, I was going to be a writer.

Eventually - after about two decades of practicing - I settled on writing screenplays as something that I was good at, and eventually optioned numerous scripts to several Hollywood production companies, and was also asked to do script rewrites. Through it all, there was a strong through-line of horror and sci-fi. Finally, my wife sat me down and explained that it would be nice (that's wife-talk for telling me "You better do this or else") if I wrote something she could read without having to turn on all the lights, make sure I was home, and get the cops ready on speed-dial just in case she got too scared.

I went to her bookshelf, saw she liked YA fantasies, and decided to try my hand. And Billy: Messenger of Powers was born. I wrote the book in about a month - all 180,000 words of it - and got a publishing offer almost immediately. However, I retained the e-rights to the book, wanting to see if I could do a good job marketing and selling the book myself. It turned out to be a good choice, because Billy: Messenger of Powers is (as of this writing) the number one highest rated e-book on smashwords.com (out of over 15,000), is a top five YA bestseller on smashwords.com, and has also been on numerous bestseller lists on amazon.com.

I followed Billy up with a suspense thriller called RUN. I was back to my roots here: RUN is a book about a man who discovers that everyone he knows - friends, family, EVERYONE - is trying to kill him. So he RUNS (hence the spiffy name). RUN has also been in the top ten highest rated on smashwords.com, and like Billy has been on several amazon.com bestseller lists for e-books.

Now it may seem that all was wine and roses (or, in my case, Snapple and carnations). But I have to add a caveat that selling books is WORK. In addition to the guest blogs and interviews (like this one), there is a constant push to get your work out there in front of other people. Trying to get others to review it, trying to deal with people who want to tear your reputation down for no other reason than because you've maybe managed to sell a few books and they haven't (yes, this has happened...highly unpleasant), trying to figure out what you are going to do today about marketing, trying to figure out what you're going to do TOMORROW about marketing, etc., etc., ad barfium.

I actually wrote a kind of primer for those who are interested in going into self-publishing (also available at smashwords.com) which is called How to Pimp Your Book. This grew out of the months (and months and months and months and...) that I spent figuring out various ways to market my work by trial and error. And by "trial and error" I mean "error and error and error and error." Marketing and selling e-books can be very satisfying: there is nothing quite like seeing a good review on amazon.com, or seeing your book overtake a book by one of your favorite authors, or watching it climb a bestseller list. But make no mistake: it is a consuming experience, not to be entered into lightly.

With that in mind, as a way of closing up this little blog (thanks for staying with me!), here are the three most important things for those of you who are thinking of self-publishing.

1) Have a professional-level book. Enter competitions. Have other professionals read your work. The market is wide open for new writers. That also means it is inundated with sadly cruddy writing. If your work is unprofessional, it doesn't matter how much money you sink into advertising. A friend told me he met one woman who spent almost $100,000 of her own money in publicity...and sold almost ten books.

2) Have a support system. You can do it on your own (maybe), but having someone to help you through the bad times and rejoice during the good is more fun. It's one of the reasons none of our national sports are solitaire.

3) Be prepared to work. This is the biggest and baddest of the big three. Writing is work. Publishing is work. Marketing is work. Work, work, work. No one is going to bang on your door and ask if they can turn you into a best-seller. You have to bang on the doors yourself.

All in all, e-publishing has been a great ride for me. I recommend it to others. After all: if I did it, who can't?


Michaelbrent Collings is the author of amazon.com bestselling e-books, Billy: Messenger of PowersRun.  He has also written How to Pimp Your Book: Cheap (or FREE) Ways to Market and Sell Your Self-Published Book. In addition to being bestsellers, as of this writing five of his works are in the top fifty highest-rated books at smashwords.com, out of over 15,000 works published on the site. and 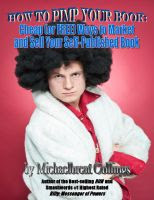