Dream Smashers celebrated her first birthday all alone in March. I'm a horrible book parent and didn't even throw her a party. To make up for it, I gave her a facelift. I hope she likes it. And I hope her readers like it, too.

Take a look. Isn't she pretty? 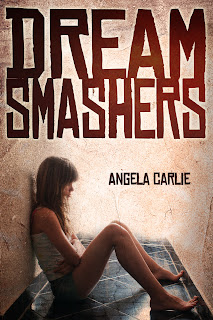 Dream Smashers has needed a new cover for a while now. It's an important story, but often gets overlooked. The original cover, which I love, wasn't sitting well with the readers. It even was nominated for a most ugly cover list over on Goodreads. The second cover was an experiment, something I whipped up myself, and not very professional.  I believe this new cover captures the emotion of the story, but also has appeal for the readers. I adore it!

Letting go is hard to do, but sometimes, it's all you can do.

Sixteen-year-old Autumn is a human heartache. Everywhere she turns people are stomping on her hopes and dreams. Her mom's a tweaker. She's lived with her chain-smoking grandmother for as long as she can remember. Even her best friend has issues. Autumn seems to be the only responsible person she knows and she's sick of putting up with it all.

When she meets Evan, a hot guy without a worry in the world, she can only wonder if he's for real or just another Dream Smasher.

A girl who no longer wants to care and a boy who cares enough for the both of them. Dream Smashers is a love story, but most of all, it's about letting go.


Thanks to my good friend, Megg Jensen, for inspiring me to get 'er done, and Rashelle Workman who referred Megg who then referred me to the cover artisan Steven Novak. Go check him out. He's awesome.

Dream Smashers is available on Amazon Kindle and wherever else eBooks are sold.  It may take a day or two for the new version to be available.